CyberCecure: Ensure that your browser shows our verified URL.

Types of Sensors on a Weather Station

A weather station will typically have the following equipment. 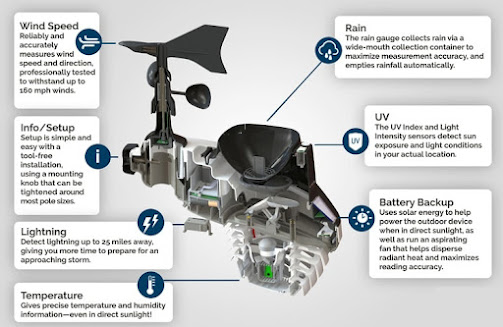 A hygrometer monitors the humidity, or amount of moisture in the air. Once more, the majority of weather stations will have two of them, one in the sensor enclosure and the other in the display console.

Anemometers are used to measure wind speed. The most popular two approaches are. One employs rotating cups on the sensor housing to measure wind, while the other uses acoustic technology to detect wind passing through a hole in the instrument.

The barometer, a vital instrument for forecasting, measures atmospheric pressure. Usually, it can be found inside a console or a recording equipment in the house. Changes in pressure that are downward typically herald stormier weather, while pressure changes that are upward herald better weather.

The rain gauge counts the amount of rain that has fallen. The approach used most frequently is a tipping bucket gauge. This gauge employs a funnel to collect rainwater; once a certain weight of water is reached, usually equal to 0.01 inches, the water pours onto tiny buckets that tip back and forth. Haptic technology is currently being used by ultra-modern weather stations to better accurately identify precipitation. Analog rain gauges are still more accurate, though. In our buying guide, we even rated an analog type as the most precise rain gauge.

A lightning detector can detect lightning up to 25 miles away from you. Some can also determine the storm's motion's direction, however this is less frequent.

The leaf wetness sensor helps farmers and gardeners by approximating the amount of surface moisture on vegetation.

The amount of accessible moisture in the soil is measured by a soil moisture sensor. Some are capable of logging the soil temperature. To successfully farm and garden, these sensors are required for irrigation decisions.

Some manufacturers of weather stations now provide the option to add air quality sensors to higher-end versions in order to detect particulate matter, as many consumers are becoming more worried about pollution.